Yishun residents at Block 112 Yishun Ring Road been living very stressfully, they are at their wits’ end after being harassed by the sunglass auntie for over a year, with one family going as far as to build a “wall” barbed with cacti on the common corridor for protection. 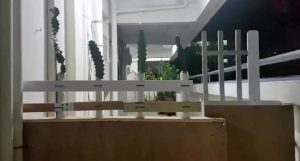 The 61-year-old man who built the structure said that he used recycled materials for the wall.

“I used recycled materials and built it within 5 hours. Wood planks, pipes and other items which I got from outside.

I planted the cactus myself and it was quite useful. I used durian husks for a while, but they started to stink after a few days, so i switched to using cactus.”

Not bad, this uncle also knows how to Reuse, Reduce, Recycle.

It seems the wall has managed to keep the Yishun sunglasses auntie at a distance.

But the Yishun: Nee Soon Town Council has asked for it to be removed as it is a fire hazard.

A spokesman for the town council said it is engaging the residents involved and has suggested mediation and legal options to the affected neighbours.

This was the last resort for them after having had to deal with the difficult neighbour since last December 2016.

They come home nearly every day to find an oil-like substance reeking of urine splashed across their door and along the corridor.

Balls of toilet paper and used sanitary pads have also been found outside their flat and on their bicycle chained outside. The culprit, they said, lives on the floor below them with her daughter.

In an interview published by The Straits Times,  IT consultant Edmund Lee, who lives with his sister and parents, said they first noticed the woman wearing sunglasses lurking along the corridor outside their flat last year. They installed a closed-circuit television camera outside their unit in February and video footage showed that she had been dirtying their corridor in the early morning hours, Mr Lee said to the reporter.

Madam Yeo Kim Hong, 65, who lives next door to the Lees, said she built a makeshift barrier along the corridor leading to their flats using a chair and a wooden plank earlier this year, but it did not deter the woman.

“The oil is very slippery and dangerous,” said Madam Yeo, a cashier.

If we remove it she can come to our doorstep and start a fire, which is more dangerous.

The police confirmed that reports have been lodged and said investigations are ongoing.

Meanwhile, the National Environment Agency said that it has requested interviews with the parties.

“We have even thought of moving out after living here for 30 years, but who will want to buy (our flat)?” said Mr Lee