The Agri-Food and Veterinary Authority of Singapore (AVA) is finally conducting monkey control operations in the area after receiving about 160 reports of monkey attacks and nuisance in the area since October last year. The monkey situation at the Segar area in Bukit Panjang is a “public safety risk”.

Two monkeys have been roaming around at Segar last year, while one was caught in November 2016, the other has been running free and becoming “more aggressive”.

In a statement on Monday (Apr 17), AVA said monkeys may carry diseases public health, and those that are aggressive are also a risk to public safety.

An elderly man was hospitalised after being bitten by the wild monkey on Monday morning.

Another resident, Ms Audrey Leong, posted a photo in a group for residents in the Segar Gardens estate showing what appeared to be blood on the floor near a bench.

The man was sitting on the bench when he was attacked from behind by the primate, according to Ms Leong. The Singapore Civil Defence Force sent the elderly man to Ng Teng Fong General Hospital after it received a call for assistance at the void deck of Block 472 Segar Road at about 7.10am on Monday.

AVA said it was aware of the incident and was investigating.

Mr Liang said in a Facebook post on Monday that he had visited the injured man, whom he identified as “Mr Tan”.

“Like everyone at Segar, I am very concerned about the lone monkey harassing and hurting our residents,” he wrote.

Mr Liang said he had asked AVA to take “even stronger measures” to catch the monkey and that the authority has agreed to step up action.

The Holland-Bukit Panjang Town Council has also stepped up surveillance on monkey sightings and is working with AVA to catch the monkey, the Member of Parliament said, adding that he advised residents not to feed and provoke the monkey in the meantime. 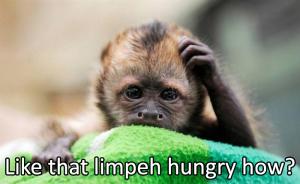 The agency is working with the Animal Concerns Research and Education Society (ACRES) to remove the monkey that is running free.

“Catching the monkeys can be challenging as they are very nimble. The many high-rise buildings in the area also make it easy for the monkeys to be out of reach by climbing up the blocks,” it said. AVA has also worked with the Town Council to prune trees and harvest fruits from trees in the estate to mitigate the situation, it added.