Mr Othman Wok, a former old guard minister and one of Singapore’s first generation of leaders, died on Monday (Apr 17) at the age of 92. Born in 1924, Mr Othman was the son of a Malay school principal. Despite objections from his grandfather, his progressive father sent the young Othman to Radin Mas School and Raffles Institution – both English-medium schools. 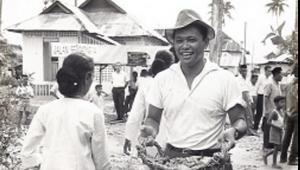 While Mr Othman was working for Utusan Melayu, he became involved in union activities, and it was as Secretary of the Singapore Printing Employees Union that he first met Mr Lee Kuan Yew – the union’s legal advisor.

Persuaded to enter politics, he joined the People’s Action Party (PAP) a few days after it was formed in 1954. Mr Othman won his first electoral battle in 1963, but was to learn that achieving racial harmony was easier said than done.

Following Singapore’s merger with Malaysia, racial tensions between the Malay and Chinese communities, stoked by fiery speeches by extremist Malay leaders from Kuala Lumpur, came to a head during the 1964 procession to celebrate the Prophet Mohamed’s birthday.

At the height of the 1964 tensions, Mr Othman himself became the principal target of verbal abuse among some segments of the Malay-Muslim community. 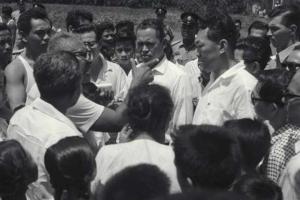 Mr Othman’s loyalty to Singapore was tested again in 1965, when they were faced with the critical decision to support or oppose separation from Malaysia.

When an independent Singapore held its first National Day Parade, Mr Othman made sure he was there – a proud member of the People’s Defence Force.

Mr Othman was to serve for 17 years, 14 of them as Minister for Social Affairs.

Promoting racial harmony was a key responsibility, as was the promotion of sports among the masses and encouraging athletes to represent Singapore. It was also Mr Othman who got the National Stadium built.

After retiring from active politics in 1980, Mr Othman served as Singapore’s ambassador to Indonesia and also on the Singapore Tourism Board and Sentosa Development Corporation.

The born storyteller also published his collections of horror stories as well as his autobiography, Never In My Wildest Dreams.

But for the man who lived through the race riots of the 1960s, unity among Singaporeans was an enduring mission, and Mr Othman continued to serve well into his 80s, giving talks on National Education to civil servants.

“Even with this terrorism problem, some of these young people do not take it seriously because it has not happened in Singapore,” said Mr Othman.”

“The test will come when a bomb explodes in Singapore, people are killed … What happens, do we tighten our bonding, become a united front of faith or we disintegrate? This is the test that we have to face if the real thing happens. I hope not. Because today when there are disasters in other countries, Singapore came together to help. I am sure were this to happen in Singapore, we will get together, to face it and solve it. I have that confidence.”